Rather than just act as a supplier of 100% pure Matricaria Chamomilla essential oil, Thracian Oils is also a farmer and manufacturer. We are careful about what the essential oil we export overseas and monitor its production from the moment the seed enters the ground until distillation completes. Here are a few key cornerstones of our business:

Place your order for wholesale quantities of therapeutic-grade Matricaria Chamomilla essential oil and Thracian Oils will export it to any location around the world in any way you want!

Thracian Oils has partnered with several manufacturers in the Thracian Valley and we’re able to meet large demands for Matricaria Chamomilla essential oils. And we can maintain your supply over an extended period of time. All you have to do is send us an e-mail at [email protected] and you can even reserve how much you need from our harvest yearly!

German chamomile is not only a popular tea ingredient but it is also revered for its curing prowess, therapeutic uses, and diverse herbal applications. In Germany, it is called “alles zutraut”, literally meaning “capable of anything”. Sometimes it is mistaken for being the “European ginseng” owing that to its healing properties.

The German chamomile, which in Latin is Matricaria Chamomilla, is one of the most prominent eastern and southern European medicinal herbs. Cultivated and originating in Russia, Brazil, Hungary, Germany, and France, it can now be encountered also in India, Australia, North Africa, and New Zealand. Hungary is the plant biomass’ chief cultivator and the herb’s flowers are then transported to Germany for distillation.

Description of the plant 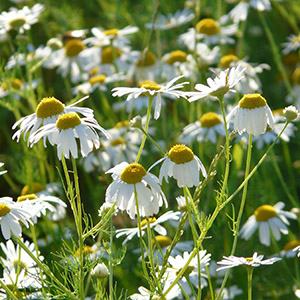 True chamomile, as it is also referred to, is an annual plant which possesses thin heavily ramified, erect stem, whose growth is between 4 and 30 inches and has bi- and tripinnate, narrow leaves. Resembling Roman chamomile oil, the German variety is extracted via a steam distillation or solvent extraction of the yellowish flowers of the plant whose blossoms are ray-like.

When fresh, the oil of Matricaria Chamomilla possesses a sweet, herbaceous aroma with gentle, fruity hints, and a viscous quality. However, if it is dried-out, its smell might become unpleasant for some people.

Chamazulene, cadinene, proazulenes (matricin and matricarin), furfural, spanthulenol, and sesquiterpenes are some of the principal chemical components of the oil. It owes its deep blue color to the chamazulene component which is formed through steam distillation of the component matricin. If the storage is prolonged, the blue color may turn into a yellow, pale green or even brownish. The oil has also up to 20% polyynes.

German chamomile oil possesses antibiotic and antiseptic properties that prevent biotic infections from further developing, i.e. infections that are a result of biotic factors, including fungi and bacteria. In addition, it is beneficial for eliminating current infections and intestinal worms. When applied to the hair, the oil eradicates mites and lice, thus maintaining the scalp damage and infection-free.

The essential oil of German chamomile effectively cures circulatory system dysfunctions and is very beneficial for detoxifying the blood and for stimulating the circulation. In this regard, the oil helps in the fight against ailments, such as arthritis and rheumatism. These properties define the oil as an antiphlogistic – meaning that it reduces edema and swelling.

The oil is believed to be quite useful for treating irritable bowel syndrome, stomachache, and insomnia. It tones the stomach up and greatly contributes to its overall functioning by fostering the secretion of stomach’s digestive juices and easing digestion.

While Roman chamomile is beneficial for calming down irritation, anger, and annoyance, especially in children, German chamomile is more effective for urinary or digestive inflammations in adults. In addition, the oil restrains blood vessels’ swelling and reduces blood pressure.

Research has outlined the various German chamomile’s powerful antioxidant and antidiarrheal properties. In addition, when taken orally, it can have a profound effect when it comes to healing colic, gastritis, colitis, and small intestines infections.

The oil of German chamomile is also useful for the battle against depression, sluggishness, sadness, and disappointment. Besides, it induces happy feelings and aids in raising spirits.

Both the German and the Roman chamomile essential oils are great antiallergenics that also help in the battle against acne. They do so by cleaning the eccrine and sebaceous glands and discharging toxins from the body via sweating. Additionally, both oils act as strong diuretics and contribute to purifying the kidneys and the urinary system by stimulating urination, as well as detoxifying the blood and even increasing the overall strength.

Our hearts also derive great benefit from German chamomile oil as it is a vasoconstrictor, meaning that it contributes to reducing the blood pressure, thus improving the heart health and diminishing the chance to develop atherosclerosis conditions.

Utilized as a diffuser for aromatherapy uses, the oil of German chamomile can also be used for treating and healing wounds.