The Thracian Valley in Bulgaria has the cleanest and most fertile fields in Bulgaria and they grow the most potent yarrow – the ingredient we use to produce therapeutic-grade yarrow essential oil that’s 100% pure. Thracian Oils operates by the seed-to-bottle philosophy to ensure we produce essential oils that are potent and powerful. Here’s what you need to know to work with us:

Give us a call right now and you can reserve a portion of our harvest at great prices.

Thracian Oils has many contacts with neighbouring manufacturers and we’re able to meet large demands of organic yarrow essential oil around the year. This network allows us to provide you with other high-grade related products you might want. Find out how we can help you and give us a phone call or write to us for a consultation.

Yarrow oil throughout time has gained the name “nature’s wound-healing oil” due to its absolutely magical, and yet very versatile, soothing and curative properties. This article will shed some light on those.

Yarrow’s scientific name is Achillea Millefolium where Achillea makes references to the ancient Greek hero Achilles of the Iliad and the Trojan War who cured the wounds of his hurt soldiers with yarrow. The perennial, herbaceous herb, native to semi-arid, temperate, and arid regions in Europe, North America, and Asia, belongs to the Asteraceae family.

Early settlers of America made use of yarrow for its amazing astringent properties, which are great against bleeding and are beneficial for the healing and restoration of wounds.

Description of the plant 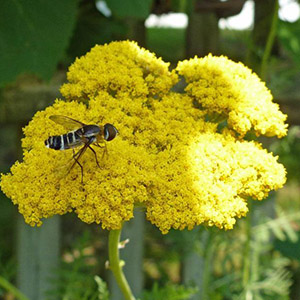 In the southern part of Colorado and the Spanish-speaking regions of New Mexico, Achillea Millefolium bears the name “plumajillo”, meaning “little feather”, due to the texture and shape of its gorgeous leaves.

The erect plant produces up to several stems whose height ranges from 0.66 to 3.3ft (0.2 to 1 m). Around the stem are dispersed the leaves, and those at the bottom and the middle are the biggest. The more or less embracing leaves are 2-8 in (5-20 cm) long and their pubescence (hairiness) varies.

The dried plant releases yarrow oil through steam distillation and it emits a herbaceous, sweet, and pungent smell, similar to the smell of chrysanthemums, when diffused.

During steam distillation’s heating process, the plant oozes out the chamazulene chemical which develops a bright blue color.

Regardless of whether an inflammation is respiratory or nasal, yarrow oil is capable of efficiently treating any of those types. It can cleanse the digestive system of spicy food and get rid of toxins in the blood stream. In this regard, it is not only beneficial for blood circulation but also for people with arthritic or rheumatic problems.

Spasms are quite dangerous and those who suffer from them know that the hard way. Extraordinary body contractions, as they are known, especially those in the respiratory system, can provoke harsh or even uninterrupted coughs, which might result in convulsions. Here’s when yarrow comes to save the day because it has very pleasant, anti-spasmodic and relaxing effects on our intestines, nerves, muscles, and respiratory tracts.

The oil of the herbaceous Achillea plant is a stupendous astringent that generates contractions in tissues, muscles, and blood vessels, and these effects are proven to be very beneficial for our bodies. Yarrow oil enhances saggy muscles and skin (outcomes of aging), reinforces and eradicates hair loss, and guarantees our gums are stronger than ever.

A thorough review of the literature has specified that there exists a patent for handling and treating dermatose, eczema, rosacea, non-allergic dermatitis, psoriasis, atopic dermatitis, or any other skin inflammation by topically applying medicinal compounds from the achillea species.

Our gastrointestinal tracts also derive benefits from yarrow oil since it has great antiulcer, hepatoprotective, choleretic, antibacterial, and anti-spasmodic effects.

It’s always annoying to visit a party or an event with a bloating stomach. Yarrow oil provides for a great relief since it removes intestines gas, as well as alleviates chest pain, indigestion (enhances digestive juices’ secretion – acids and bile), stomachache, and flatulence.

Make use of yarrow oil to eliminate the extra water and salt in the body which will, as a result, give a cooling feeling. Since urine contains some fat, yarrow might also help with controlling the weight.

There exist hosts of botanical remedies, comprising extracts or powder of the Achillea species, which are used for treating soft issue and skin infections, as well as persistent inflammations.

Native people and peoples from Europe and North America have used the herbaceous plant and its wondrous essential oil as an abortifacient, contraceptive, and emmenagogue. Yarrow is generally made use for treating hepatobiliary conditions, spasmodic gastrointestinal ailments, as well as overactive respiratory and cardiovascular disorders.